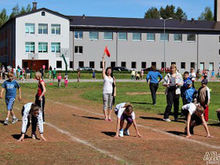 Alatskivi Secondary School, named after Juhan Liiv, is a public school that gives secondary education in Tartu county Alatskivi municipality.  The first reports of the work of the schools in Alatskivi parish date back to 1766. By the year 1810 educational systems in the form of village schools had thrived: there were Haapsipea, Naelavere, Suurlahe, Torila, Savastvere and Lahepera schools working. The predecessor for Alatskivi Secondary School was Alatskivi Higher Primary School of 6 grades, which was established in 1920 joining surrounding village schools and practiced in the rooms of Alatskivi castle. In 1940 the school was altered to accommodate 7 grades. On 25 October 1950 Alatskivi incomplete Secondary School became Alatskivi Secondary School with opening the 8th and 9th grade. In spring 1961 building of the new schoolhouse was started and in autumn 1962 the new school year started in the new schoolhouse. In the same year Estonian elementary school was changed in to 8-grade school. In 1989 pupils received 9-grade elementary school certificates for the first time and the school was changed into 12-grade Secondary School. In 1990 Alatskivi Music School was opened in the old schoolhouse which is now called Alatskivi Arts School. In Arts School pupils get to learn different musical instruments, singing, creative crafts. All high school pupils in grades 11 and 12 also have the opportunity to participate in traffic studies and receive a driving license. The school family is delighted also to have Alatskivi library in the schoolhouse. Therefore, borrowing good books is to hand for everybody. Alatskivi Secondary School was renovated in 2011 and also got a new computer classroom as a result.
Juhan Liiv, a poet and writer, came from Alatskivil, who is considered an initiator of contemporary poetry. On 30 April 1964, the 100th anniversary of Juhan Liiv, the writer´s name was given to the school.  Along with the anniversary an idea evolved to start giving Juhan Liiv named poetry prize. In 1970 giving out prizes like this was banned. In 1984 giving out the poetry prize of Juhan Liiv was started once again and is done so since. The events related to Juhan Liiv´s poetry are the most important even today. On 30 April the anniversary of Juhan Liiv is celebrated at school.  On the occasion many well known Estonian writers and poets have visited our school. Every year the Republic of Estonian Independence Day is celebrated, in which case the best pupils are asked to the  mayor´s reception. Every second year there are School Olympic games held in our school and former students of Alatskivi Secondary School gather every four years.
Alatskivi loves its school and wants it to last for a long time!​
Powered by